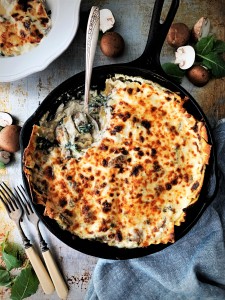 Everyone loves a good lasagna, and this one is definitely for the mushroom lovers. I love how this pretty pasta bakes up in no time, and don’t get me started on the crispy bits near the edge of the skillet. The mushroom cream sauce has whispers of white wine, garlic, Dijon mustard, and thyme, so you know it’s going to be good. And I haven’t even mentioned the ricotta and mozzarella yet! To be sneaky like me, stir in your favourite baby greens (nutritional bonus points). There are layers of creamy mushroom goodness in this lasagna, and, thanks to a short stint under the broiler, that ooey-gooey cheesy crust tastes even better than it looks. Served with a side salad, this pasta is fancy enough for company and quick and simple enough for a weeknight family meal.

In a large saucepan of boiling salted water, cook the noodles for 2 minutes less than the package instructions. Drain and lay them in a single layer on clean kitchen towels.

While the noodles are cooking, in a 10-inch cast-iron skillet, heat 1 Tbsp of the butter over medium-high heat. Sauté the mushrooms, stirring occasionally, until softened and almost no liquid remains, about 9 minutes. Stir in the garlic and thyme. Cook until the skillet is dry, about 2 minutes. Stir in the white wine. Cook until all of the liquid has been absorbed. Add the baby greens, and cook, stirring occasionally, until they begin to wilt, about 2 minutes. Scrape the mixture into a bowl. Stir in ¼ tsp of the salt and the pepper.

In the same saucepan you cooked the pasta in (no need to wash it first), melt the remaining 3 Tbsp butter over medium heat. Stir in the flour and cook, stirring constantly, for 2 minutes. Gradually whisk in the milk. Cook over medium heat, whisking constantly, until thickened, about 5–6 minutes. Add ¾ cup of the mozzarella, the ricotta, and mustard, then the remaining ¼ tsp salt, a pinch of cayenne pepper, and a pinch of nutmeg. Stir constantly until the cheese is melted. Remove from the heat. Season to taste.

Preheat the oven to 400°F. Wipe out the cast-iron skillet you used for the mushrooms and greens and add the oil, tipping the pan so it’s evenly coated. Pour ½ cup of the sauce into the skillet. Arrange 3 of the noodles over top. It’s ok if they go up the sides but not if they peek over the top. Top with half of the mushroom mixture. Spoon half of the remaining sauce over top. Arrange the remaining noodles, perpendicular to the bottom ones, over top. Finish layering with the remaining mushroom mixture, sauce, and ¾ cup mozzarella. Sprinkle with the Parmesan.

Bake the lasagna until the mozzarella is melted and the sauce is bubbly, about 15 minutes. Turn on the broiler and broil until the top is golden brown, 2–3 minutes. Let stand for 5 minutes before serving.

From Vegetables: A Love Story, copyright © 2021 by Renée Kohlman.