At Home with Jon C. Stott

I’d originally planned to spend May through September in Michigan’s Upper Peninsula, where for 35 years I’ve been enjoying extended summers. There, I would visit historic sites, take scenic rambles, and frequent the tap rooms of craft breweries—all in the name of research for a book I was writing for an American publisher. 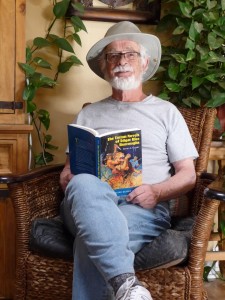 Of course, my plans have changed. I’m still going to travel—down the paths of memory. I’ll be reading and reflecting about the Tarzan books, comic strips, comic books, and movies I’d devoured seven decades ago. I was the littlest kid in the class, a skinny, count-his-ribs runt, unathletic as could be. But the adventures of the Lord of the Jungle fuelled my fantasy life and, more than once when we were at the lake cabin, I rescued my unsuspecting sisters from Gimla the crocodile who was gliding toward them in the shallow waters. Since then, I’ve spent most of my adult life as an English professor. So, as I reread and rewatch, I’ll also be asking questions about the stories’ texts and subtexts and the contexts in which they were created and the contexts in which I consumed them. I don’t know what I’ll find, but I’m sure it will be a very interesting journey. And, because I can’t help it, I’ll try to turn my memories and reflections into a book.

PS: erbzine.com is a great source for old comic strips and comic books. 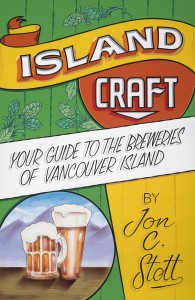 One of the most interesting discoveries of my beer travels on Vancouver Island was the sense of community that existed at breweries between the people who made and served the beer and their patrons. Riot Brewing in Chemainus is a good example of this relationship. In the following excerpt from Island Craft, I describe my visit to Riot and meeting with owners Aly Tomlin and Ralf Rosenki.

As we were chatting, several people dropped by to order either a pint to be enjoyed in the tasting room or a six-pack or growler to take home. Patrons and owners didn’t just greet each other by name; they chatted about the brewery and about local affairs. After one such short conversation, Tomlin commented on how important the relationship with community was, especially for a brewery in a small town. “It’s not just a place to drink beer; it’s a meeting place. The community has embraced us, and we want to do everything we can to give back to the community.”

Rosenke and Tomlin then led me on a circle tour of the brewery. “Here is where we hold our musical events and other activities,” Tomlin said as we reached the back of the tasting room. Then we entered a hallway leading to the brewery, perhaps one of the most interesting hallways I’ve walked through. On the doors to the washrooms were silhouettes indicating not only male and female but also transgender. We don’t care, a sign proclaimed. This simple gesture greatly pleased the LGBT community and also served as another indication of how Riot Brewing had reached out to and embraced the community. On the wall facing the washrooms was a giant calendar on which the name of the month and the dates of the days of the week could be written. Already nearly half of the days for the current month had been filled in with events that either would occur here or were being sponsored elsewhere by Riot.

Just inside the entry to the brewhouse stood an old barber’s chair just like the one I remember from nearly seven decades ago when I’d sit on a board placed across the armrests and get a 25-cent haircut. It was the main prop for one of Riot’s most interesting tasting room events—“Beer and a Cut.” For $25, customers could, to use an old haircutting expression, “get their ears lowered” and also enjoy a pint of one of Riot’s beers—presumably after the cut, so that bits of hair wouldn’t float around at the top of the glass. Profits from the event are donated to a local community organization. Other “Beer and a . . .” nights included a yoga night and a painting night, with instructors on hand.