At Home with Don Hunter

There has been new stuff to discover.

Well, it would be new, wouldn’t it, having been just discovered?

The things we think about with all this new writing time on our hands. (As if we didn’t have the same time before things happened, but instead we just made coffee and read the paper and sharpened HB pencils instead. And there’s a thing: I still do all first drafts, and often second and twelfth, in pencil on an 8.5 x 11 lined yellow pad. Has to be 8.5 x 11. Tried one of the longer ones, but it fell off my knee.)

So, new. As in: What do you do when the bank, which is still open but has just shut down its counter service, has no idea of when they’ll restart?

Our favourite two tellers, D and J, wave cheerily as I enter, then with flapping arms and widened eyes, wave me away as I get close. Everyone is super-conscious of what provincial health officer Dr. Bonnie Henry means by social distancing. Even favourite tellers behind counters, which one would think would be sufficient separation. Apparently not at our bank, which is actually a credit union.

“Cash,” I add. I make that sliding finger-tips motion that is the universal signal for that commodity.

I have promised a friend to lend him some money for an “immediate need.”

He had stressed, “Cash, please.”

He’s a friend in need. Part of all this new stuff. We’re all together in this. I don’t ask. I just go the bank. 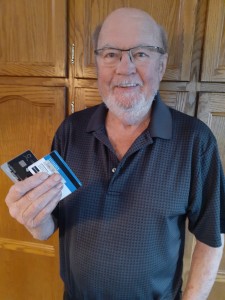 Now D points to the door where I just came in, and into the corner. “%$@^machine,” she advises in a kind of loud whisper. You know. A small, older woman is at that machine, which is turning out money in orange bills. Fifties. She should be careful, when she leaves, I think.

“Christ!” I think, reacting to sudden illumination, as would Samson Spinner, one of the stalwarts in my book Spinner’s Inlet (1989) and its 2019 sequel, Return to Spinner’s Inlet.

One of those: An ATM. Which I have never used.

The kindly and understanding manager steps in from a suitably socially acceptable range.

I wave my Visa.

I explain that the only other card I own is a bank debit card that I use only at Costco because they don’t take my kind of Visa.

“That’ll be the one,” she says. “Put it gently into the slot there.”

I do. Then I say—now becoming comfortable with the banking jargon—“But I don’t have a PIN for the ATM.”

She smiles. Lots of those going around, as the favourite tellers watch.

“Try the one you use at Costco,” the manager says. 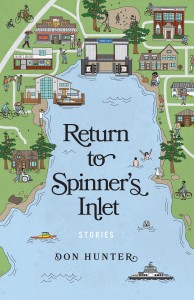 Rachel held the phone away from her for a moment.

The woman’s voice, a youngish one, had shaken her.

“I’m looking for a Rachel Spinner who was engaged to my great-uncle during the Second World War.”

She looked at a framed photograph on the wall over her fireplace. A young Rachel in a blue uniform—skirt, tunic, and cap—with the two thin stripes of a second officer in the British Air Transport Auxiliary, and a pilot’s wings. One of the hundreds of young women who ferried every type of new and repaired military aircraft between assembly plants, transatlantic delivery points, and active service squadrons and airfields across the UK. Beside Rachel, a slim young man in Royal Air Force blues with flying officer’s rings on his sleeves. Jack Thomas.

“What was his name?”

“Jack Thomas,” the young voice replied. “My father was his nephew.”

Jack. Rachel’s Jack. A Welsh farm boy who had answered the call as soon as war was declared. In a pub she laughed when Jack brought her a pint of bitter instead of the gin and orange she had requested. “More for your money,” he’d said, with that smile. The smile she fell for—and forever stayed in love with.

“Where was he stationed?” Rachel asked.

Rachel’s eyes welled. Memories. All she had, along with a picture on the wall.

“Where are you?” Rachel asked.

“Sally. Sally Thomas.” There was a wait of a few seconds, then, “I really need some help.”

Rachel had known little of Jack’s family in the brief time they had been given, and in the chaos of war had met none of them. She did know that she would not be the first senior to be called by someone they had never met, claiming to have a family connection and requiring help.

“What kind of help?”

The young woman hurried on. “My dad always said that if I ever got into trouble while I was travelling, he was sure I could call you for help. His name is Philip. He was

“How did you know where I live?”

“It was in the free paper, the one in the boxes. It said,

‘Reprinted from The Tidal Times.’ It was quite a coincidence, eh?”

It would have been the profile.

Times’ owner Silas Cotswold had been running a series titled “Prominent Personality Profiles” and Rachel had agreed, after much beseeching, to talk with the young reporter Cameron Girard who was writing the series. (Cameron had told all his subjects that Silas had an arrangement with other newspapers which paid him a modest fee to run any of his features they found attractive.)

Cameron had dubbed Rachel “Matriarch of the Clan.”

“Like ‘Monarch of the Glen,’” Samson had quipped, but not to Rachel. “Without the antlers.”

Cameron had produced several other profiles before managing to corral Rachel, and had failed with other possible subjects. Finbar O’Toole had demanded a hundred dollars for an interview. “The British tabloids all pay for exclusives.” Constable Ravina Sidhu demurred on the grounds a profile might “out” her and expose any undercover work she might undertake in the Inlet. And the Bell-Atkinson geeks had begun to talk, both at the same time, so that the resulting chaos and confusion had persuaded Cameron to leave them be.

Rachel had been surprised at how many details the young charmer had taken from their conversation over tea and raspberry scones, and was impressed by the piece he had written. And now it had impressed at least one other, and was being put to use. The profile had been packed with detail about Rachel and her war experiences.

“I think we should meet,” Rachel said. “Where are you saying in Vancouver? I could catch the ferry, or you could come . . .”

“I would like to meet you. Jack was very important to me.”

“Yes, I know about that. It was terrible.”

“How was Jack known among his pilot friends? What did they call him?”

As any Welshman was called, and as Rachel had heard over and over in the pubs that she and Jack visited with his flier mates: “Hey, Taffy, it’s your bloody round!” Rachel chuckled.

“Enough to get me back home. To Toronto. Soon as I can. I’ve had some problems.”

Rachel waited. Memories arose. Walks down country lanes, grassy banks with wild primroses, daffodils, holding hands, a kiss, and another . . . and then, nothing, just another name on a long, sad, list.

“Thank you!” And quickly, “I’m near a Western Union office, on Hastings Street.”

“I cannot do it until tomorrow, until our credit union opens.”

“And the second thing.”

“Promise me that you will do what you say—go home, to your family. They will be missing you.” She added, “Not everyone gets a second chance.”

She put the phone down. Then she went online and  checked the price of one-way airline tickets to Toronto.

Then she called Constable Ravina Sidhu.

The next morning Rachel was at the credit union when it opened, as was Ravina.

It had not taken Ravina long.

“That is her real name, Sally Thomas. And she is from Toronto.”

“But she is a pro. She’s been scamming seniors across the country and skipping just ahead of the police.

She’s an expert at online researching, a real whiz apparently. She was kicked out of the University of Waterloo when she did her first job on the head of her computer studies department. She said she was just experimenting. Her specialty is looking for obituaries, and building a family connection from there. She can start way back, old newspapers, stuff like that.”

Rachel smiled. It was one of the avenues her own genealogy searches took her down and had done for years. It took her a long time to learn it. Sally Thomas, it seemed, was a quick learner.

“What do you want me to do?” Ravina asked and frowned and shook her head at Rachel’s reply.

Rachel walked home, made herself some herbal tea, and smiled as she studied the photographs of Jack and herself.

“She took a cab marked ‘Airport Service.’” Ravina poured herself a cup of tea. “Maybe it’ll work out . . .”

Rachel looked at Jack’s photo. Was the smile a bit broader in the afternoon light?