Saskatoon berry pie is the quintessential Prairie pie, and it’s a mainstay on the Gallery Cafe’s dessert menu. Sarah sources Saskatoons from Prairie Berries in Keeler for this recipe, which has been adapted over time by cafe staff and generations of women in the Moore family. Yvette even has a painting titled Saskatoon Pie – Just Like Mom’s, which depicts her daughters preparing a pie at the kitchen table. With a jammy berry filling and a flaky, golden brown crust, Saskatoon berry pie is best served topped with a generous scoop of vanilla ice cream, alongside coffee or tea.

*If you’re using frozen berries, don’t thaw them before using them in this recipe.

Tip: The pie can be baked immediately or frozen once assembled. To freeze it, prepare the pie in an aluminum pie pan as above, but don’t apply the egg wash. Transfer to a large freezer-safe bag and freeze for up to 3 months. When you’re ready to bake, brush egg wash over the frozen pie and bake directly from frozen, per the method. You might need to add a few more minutes to the baking time. 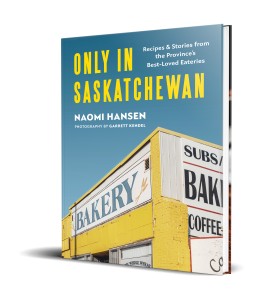