It brings us great joy to share that Noorbanu Nimji, author of four editions of her cookbook A Spicy Touch, the most recent published by us at TouchWood Editions, has been inducted into the Hall of Fame at the 2021 Taste Canada Awards. The Hall of Fame Award recognizes Canada’s culinary heroes who, through books, have helped to shape our distinctive food culture in a significant way or who have influenced our perspective of it, and thus have had a lasting impact on Canadian cuisine. There are two annual Hall of Fame Awards—one to recognize current living authors and the other for authors deserving of posthumous appreciation. 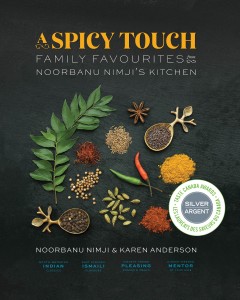 Nimji’s co-author on the fourth edition of A Spicy Touch, Karen Anderson shared touching remarks about her late friend and collaborator:

“We stayed in touch and I did a story on her for CBC Radio in 2006. At that time, she was looking for a recipe tester and writer and she took me into her kitchen as her apprentice. As a novice Indian cook, my results were a great litmus test.

“We began work on A Spicy Touch: Family Favourites from Noorbanu Nimji’s Kitchen, her fourth book. The previous three books had sold over 250,000 copies and had spread around the world through the diaspora of East African Ismaili Muslims that had fled their homeland and spread to 25 different countries in the 1970s.

“The book took nine years to complete because we also gave cooking classes and I started taking people to India annually as well. With our dear friend Pauli-Ann Carriere on board to do the photography, editing by Tilly Sanchez, layout by Platform Design and printing by Friesens in Manitoba, we published the book in late 2015. In 2016, it won Silver Medals at the IPPY awards for Best International Cookbook and at the Taste Canada awards for best Cultural Cookbook.

“Noorbanu was also named to Western Living magazine’s Top 40 Foodies at the age of 80. She’s been featured in Chatelaine, Quench magazine and Serious Eats posthumously. And now, she is being inducted into the Taste Canada Hall of Fame.

“Noorbanu was a humble person who lived to serve her family and community. She loved helping others and expected nothing in return. She would be surprised and delighted to learn that work she did out of love is being recognized as part of the fabric of Canada’s food culture. On behalf of her four children and all the Nimji family, I would like to express our deepest gratitude to Taste Canada and the Culinary Historians of Canada for this immense honour of our beloved mother and mentor.”