TouchWood Editions is pleased to announce that A Match Made for Murder by Iona Whishaw has been shortlisted for the 2021 Bony Blithe/Bloody Words Light Mystery Award. The shortlist was announced April 14 and the winner will be announced online on May 28. 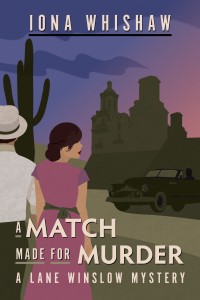 A Match Made for Murder is the seventh book in Iona Whishaw’s Lane Winslow Mystery series and is among four other titles nominated for this year’s award which is presented to the books that “make us smile.” The $1000 cash prize, and stunning trophy, is awarded to the most entertaining and fun-to-read Canadian “light mystery” which includes cozies, capers, satire, and humorous books—in short, anything from laugh-out-loud books to gentle humour to good old-fashioned stories with minimal overt violence or gore. This year marks the tenth year the Bony Blithe has been awarded.