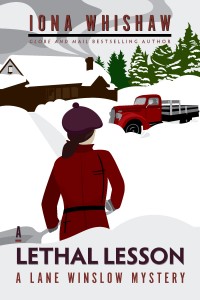 TouchWood Editions is beyond thrilled to announce that A Lethal Lesson by Iona Whishaw has been nominated for the Bill Duthie Booksellers’ Choice Award for the 38th Annual BC and Yukon Book Prizes. The eighth novel in the bestselling Lane Winslow Mystery series is among four other finalists for the award which will be announced at the BC and Yukon Book Prizes Gala on Saturday, September 24, 2022 at the University Golf Club in Vancouver.

This is Iona Whishaw’s first nomination at the awards. “To be on the list of nominees for the Duthie Booksellers’ Choice Award is a huge honour,” says Whishaw. The award is a full circle moment for the author, as she recalls the “wonder and adventure” Duthie’s provided during her childhood. “My favourite bookstore in the world when I was young was Duthie’s on Robson,” she says. “In the years since, I have received enthusiastic support from indie bookstores all over North America, especially at home in British Columbia. I have the deepest gratitude for the verve and passion with which they so actively support writers.”

The Bill Duthie Booksellers’ Choice Award is presented to the originating publisher(s) and the author(s) of the book that is the most successful in terms of public appeal, initiative, design, production, and content. For more information please visit bcyukonbookprizes.com.