TouchWood Editions is pleased to announce that Michael Layland has won the prestigious Basil Stuart-Stubbs Prize for Outstanding Scholarly Book on British Columbia for his latest book, In Nature’s Realm. The $2,500 prize will be awarded at UBC’s Irving K. Barber Learning Centre in April. The announcement was made on Monday, March 2, 2020. 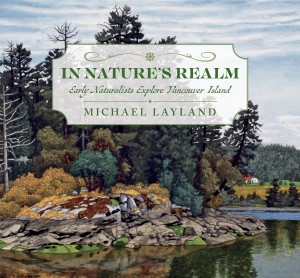 In Nature’s Realm: Early Naturalists Explore Vancouver Island is a celebration of the richly diverse flora and fauna of Vancouver Island as explored through the records of explorers, settlers, and visitors reaching back as far as 13,000 years. Thoroughly researched and beautifully designed, it gathers initial reports, recorded histories, and personal accounts left by the Island’s early naturalists who studied the region’s plant and animal life. It is the third book in Layland’s award-nominated series on the history of European discovery and settlement of the region, which also includes The Land of Heart’s Delight (2013) and A Perfect Eden (2016).

“Since moving to Vancouver Island nearly 30 years ago, I’ve been fascinated by the island’s rich history,” says Layland, “in particular during the eras of exploration and early settlement. In Nature’s Realm combines my twin passions of history and nature, and complements my two earlier books. It tells how the Island’s flora and fauna appeared to the naturalists among the explorers and early settlers. It shows how their understanding was constrained by limited time and equipment, as well as the political motivations of their sponsors. In telling the story, I pay tribute to the Island’s original naturalists, the Indigenous Peoples, whose knowledge is at last being ‘discovered’ and appreciated.”

The Basil Stuart-Stubbs Prize for Outstanding Book on British Columbia is sponsored by UBC Library and the Pacific BookWorld News Society and recognizes the best scholarly book published by a Canadian author on a BC subject. It was established in memory of Basil Stuart-Stubbs, a bibliophile, scholar, and librarian who passed away in 2012.

Michael Layland was president of the Victoria Historical Society, the Friends of the BC Archives, and is an amateur naturalist. Trained as an officer and mapmaker in the Royal Engineers, now retired, he has authored three books on the progression of European knowledge of Vancouver Island.