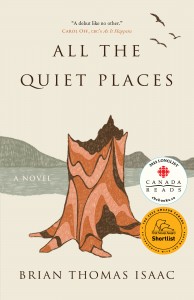 TouchWood Editions is pleased to announce that All the Quiet Places by Brian Thomas Isaac has been shortlisted for both the Amazon First Novel Award and the Indigenous Voices Awards. This is Isaac’s debut novel, which has already garnered praise from fellow authors Gil Adamson (Ridgerunner, winner of the Writer’s Trust Fiction Prize), Waubgeshig Rice (Moon of the Crusted Snow), Richard Van Camp (Moccasin Square Gardens), and Drew Hayden Taylor (Chasing Painted Horses).

All the Quiet Places tells the coming-of-age story of a Sylix boy in the 1950s in the Southern Interior of British Columbia. In her praise for the book, Gil Adamson writes, “Young Eddie Toma’s passage through the truly ugly parts of this world is met, like an antidote, or perhaps a compensation, by his remarkable awareness of its beauty.” The novel has recently been longlisted for Canada Reads 2022, and was named by Indigo as a Top 100 Book of 2021 and a Top 10 Canadian Fiction Book of 2021. It has received praise from CBC’s Carol Off, who calls it “a debut like no other” and CBC Unreserved’s Richard Van Camp, who says, “what a journey this book takes you on.”

Announced on May 6, 2022, All the Quiet Places is one of two finalists in the Published Fiction category at the Indigenous Voices Awards. The jury complimented Isaac on “the novel’s unflinching gaze, meticulous detailing and fierce attachment to family, land and love.” The winners will be announced in a virtual ceremony on June 21, 2022.

Equally as exciting is Isaac’s shortlist for the Amazon First Novel Award, which was announced on May 10, 2022. All the Quiet Places is among six finalists for the prize which will be announced at an in-person ceremony on June 1, 2022.

For more information on the awards, please visit indigenousvoicesawards.org and thewalrus.ca respectively.