At Home with Rebecca Hendry

Hello from week six of social distancing! My name is Rebecca Hendry, and I am a novelist and editor living in Gibsons, BC, with my two young-adult kids. The nature of my job means I am usually stuck at home anyway, so not too much has changed. Well, not too much but also, everything. You probably know what I’m talking about. 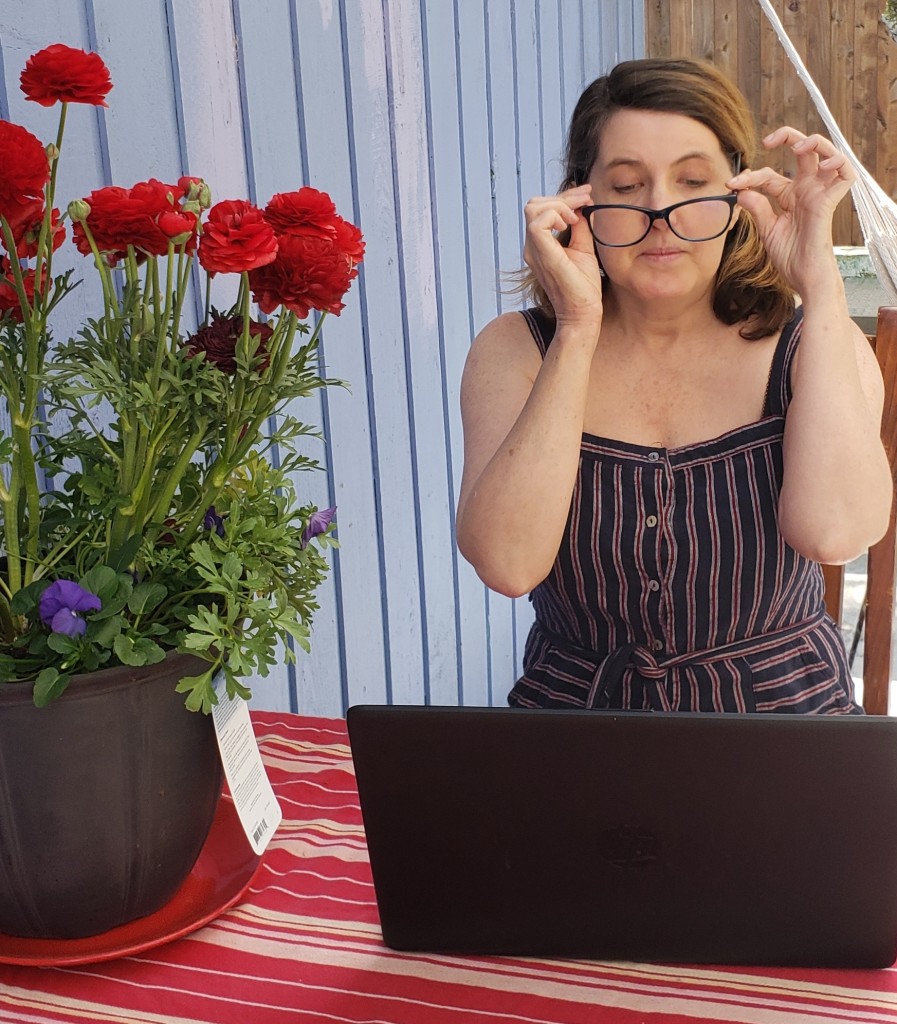 Some of you out there may have had grand plans for what you could achieve with this enforced staycation. Perhaps you have renovated your kitchen, started a curbside sourdough bread company, or bought a small sheep farm. Good for you.

This is a glimpse at what life stuck at home has been like for me.

So here I am trying to look literary and intellectual as I pretend to write. The truth is, I am not writing fiction during this time, and I have made peace with that. My third novel is percolating in the back of my mind, but I am not forcing myself to work on it anymore. While I may have that “extra time” writers always complain they don’t have enough of, grocery shopping now takes seven hours because I have to sanitize every grape and every bag of chips when I get home. I’m also doing more housework because I guess things need to be clean right now, and I’m planting a garden in case cauliflower goes up to $9 this summer.

In this photo I may also be pretending to work on an editing contract. While I am still working, though about half as much as usual, if you could see my computer screen you would see Google tabs for Acorn TV, Facebook, a recipe for gluten-free pizza crust, the best flowers to plant for bees, and the lyrics to a song I heard on the radio yesterday. 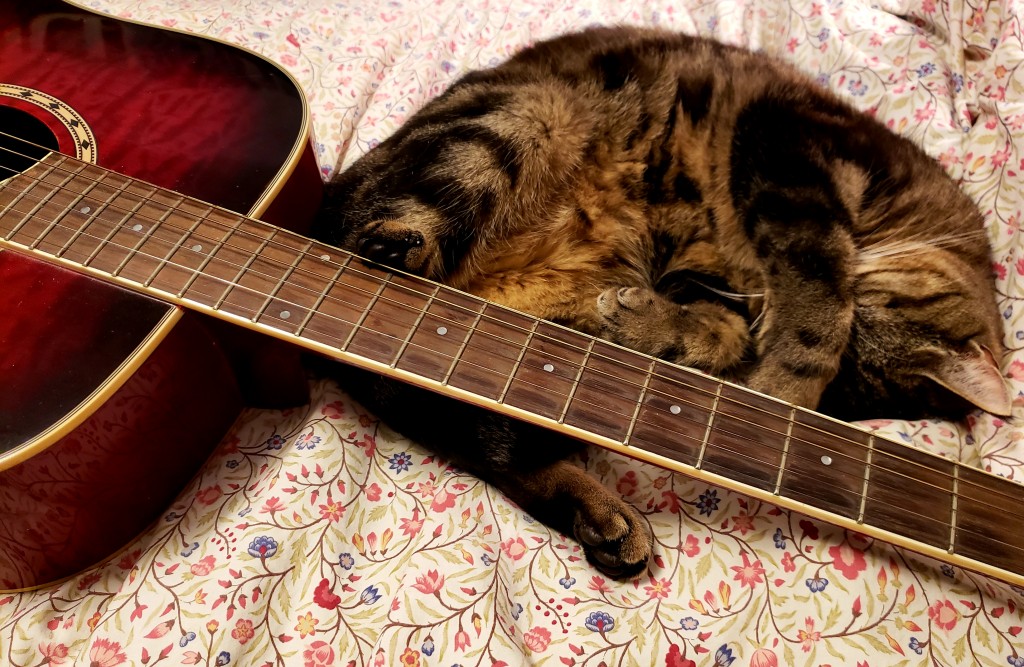 I have been trying to play more guitar so when the pandemic is over I can finally be in that band I’ve always wanted to start. Fender Play has offered three months of online lessons free, which is amazing, but I try the lessons for five minutes, get bored, and go back to playing the same four songs I always play: “Miss Ohio” by Gillian Welch, “Blue Skies” by Tom Waits, “Can’t Find My Way Home” by Blind Faith, and “Paradise” by John Prine. With my band’s limited repertoire, our cat Chuqui will likely be the only audience member.

I bought a stack of books from Talewind Books, our local bookseller, when this all began. Books are like comfort food, and it makes me feel peaceful and happy to look at the stack even if I’m not getting through it that quickly despite the “extra time.” This is me in my hammock with a copy of the wonderful novel Aria by Vancouver’s Nazanine Hozar. 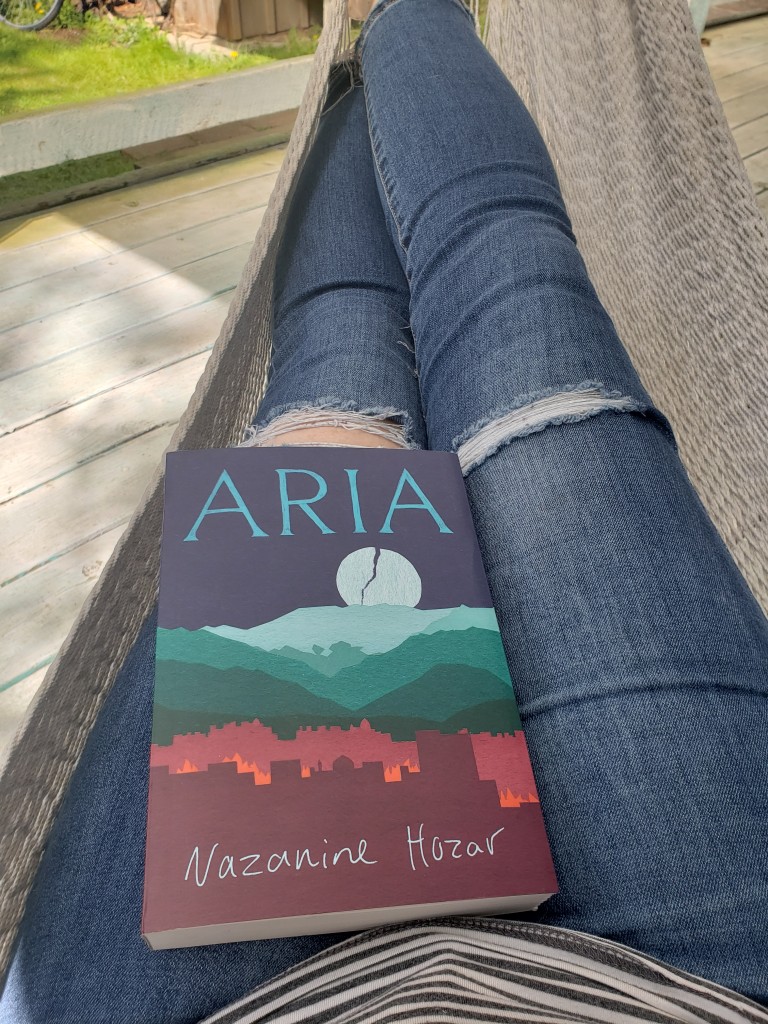 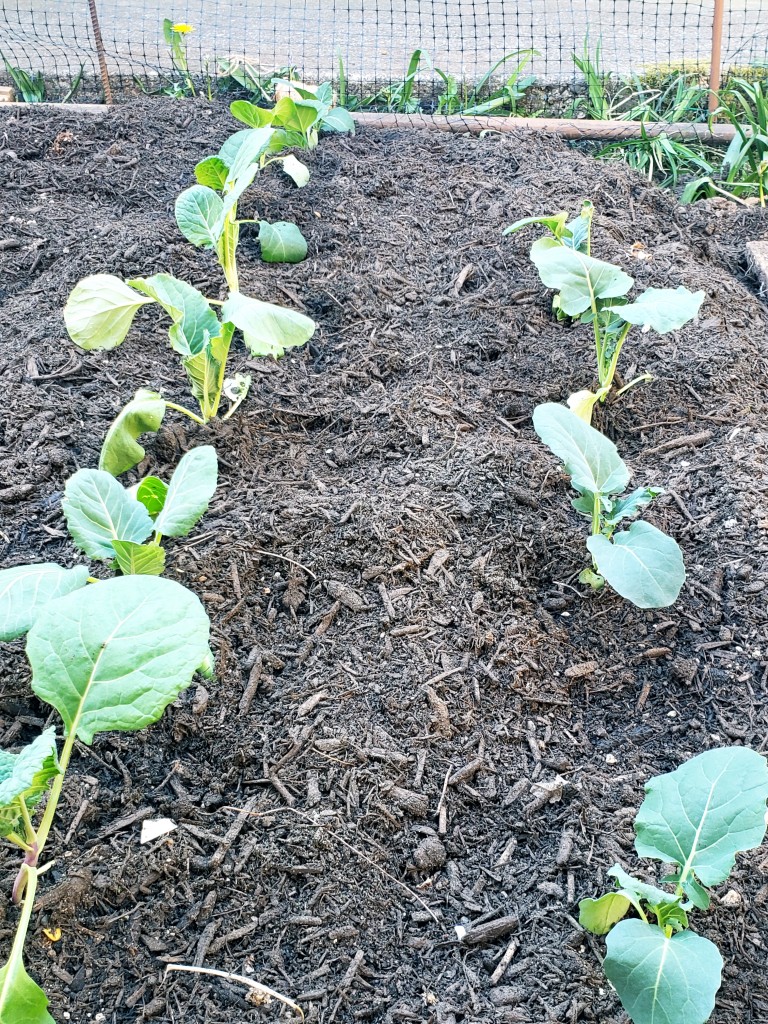 Ta-da! The apocalypse garden. I do not have a green thumb; historically, most of my windowsills have been graveyards for houseplants I forget to water. But I am learning. Here we have broccoli, cauliflower, brussels sprouts, and cabbage. I don’t know which is which because they came in a multi-pack. And I might have planted them too close together.

Take care out there, folks. Be kind to yourselves. Let’s all just keep doing our best until this passes. Whatever your best is, it’s enough.

I chose this writing sample because it’s about baking bread, which a lot of you are doing right now. 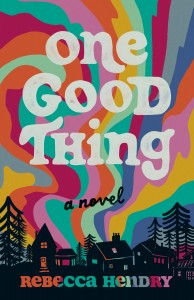 Delilah sits up and looks out her window. All she sees is lichen-covered rock. It’s the side of the pilot’s memorial where she climbed with her dad the night before. There is a fly buzzing angrily around the window. Her dad has warned her about the mosquitoes, like the coming of the apocalypse, but she hasn’t seen one yet.

She pulls the wool blanket aside, letting in the oven warmth of the kitchen. Her mother is swinging her hips, long velvet skirt flowing, as she bangs the bottom of a rusty bread pan to loosen the freshly baked loaf.

“Do you want, do you want, do you want to dance with me, baby?” her mother sings, letting the bread pan clatter on the counter as she turns to Delilah, arms wide. Delilah allows herself to be embraced, swayed. Annie smells like cinnamon, yeast and rosewater. Over her shoulder, Delilah can see six loaves of bread cooling on the counter, a pan of cinnamon buns crusted with brown sugar and raisins. A tiny, familiar alarm sounds in her chest.

Her mother releases her. Cups her face and peers into her eyes. Delilah looks away. Annie kisses her cheek and turns back to her work. There’s another batch starting, a bulging damp cloth covering a large silver bowl.

Annie waves a delicate hand. “I’ll freeze some. I could probably leave it outside at night. I won’t need to bake for weeks.” She digs a fork around a cinnamon bun and releases it, turning to offer it to Delilah. “Breakfast.”

Delilah takes it. It’s heavy, probably from barley flour and molasses. Delilah has seen the fluffy kind of cinnamon buns with the white icing, but she has never tasted one. She imagines they would melt like snow on her tongue. “Thanks. Where’s Dad?”

Annie shrugs her thin shoulders. “Don’t know. Outside, I guess.” She dumps the dough out of the bowl and starts kneading, humming to herself. How much more is she going to make, Delilah wonders. How much bread can three people eat?

Delilah pulls on her Keds and her rainbow sweater, opens the door and walks out into the bright morning, gnawing on the cinnamon bun. The wind chimes tremble when she closes the door, singing a hesitant song behind her.

The little hill outside their shack is a sloping dirt road that curves at the bottom and heads toward a strange building that looks like a tin can stripped of its label, cut length-wise and then plunked cut-side down onto the ground. A sign outside by a rickety wooden porch says “Weaver and Devore Trading.” There are brightly coloured shacks scattered on either side of the road like a string of mismatched beads. Her dad is standing by an old yellow truck heaped with firewood, talking to a large man who’s unlatching the tailgate of the truck. She can feel herself acclimatizing to her new surroundings, a strange calmness descending on her after the last few months of chaos. She likes this place, but she can’t put her finger on why.