At Home with Julie Paul

Hello there. I’m Julie Paul. I’m a writer of short and long fiction, poetry, and personal essays, living—and social distancing—in Victoria, BC. I’ve published two books of short fiction with Touchwood / B&G, The Pull of the Moon (2014), and Meteorites (2019), as well as the story collection The Jealousy Bone (Emdash, 2008) and a book of poetry, The Rules of the Kingdom (MQUP, 2017).

Like most creators, I’ve had a challenging time maintaining much focus in these strange and disturbing days. It’s hard to grow anything when the ground has disappeared…. Still, when I have been writing, with my online writing group, it’s been mostly what my friend rightly called “observational,” which may be all that we can do in times of such uncertainty: documenting the days, the moments, the feelings, as they arise, and whatever is in front of us. For me, writing like this can offer comfort. I’ve also had one Zoom meeting with another normally in-person writing group, in which we talked about the writing craft and our current projects, which was another great comfort!

One of my current projects is offering a daily word prompt for writers and other creators, via Instagram and daily emails, and I’m carrying on with that. Some of us may be creating out there, or will hopefully return to it soon. You can find out more at www.juliepaul.ca.

Normally my day job is as a Registered Massage Therapist, but that’s not happening these days. I’ve been off for ten days now, and aside from writing, I’ve been getting outside, in the garden and on quiet walks, and playing tennis with my husband—at a court with no other players, although I’ve just heard that courts are now closed. I’ve been reading, too, although every scene I read that involves group activities, dinner parties, restaurants, dancing, etcetera, pulls my awareness to the difference between that and our new reality. My novel-in-progress includes characters travelling freely around the world, extravagantly. Will I need to call it historical fiction now?!

We’ve just adopted a beautiful young tabby cat, Serena Silver, so I’ve also been sending cute cat pics to my daughter, who’s stuck in her Montreal apartment. She promptly replies with a cute cat pic of her own, of her “old man cat” Freddy. It’s been years since we’ve had a pet, and I have to say, it’s proving to be a very welcome focus right now. Here she is: 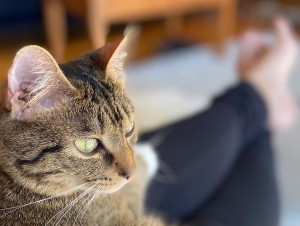 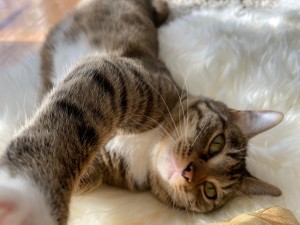 Here’s an excerpt from the title story of my most recent story collection, Meteorites. I selected this one because it begins with a dinner party. Who knew we could become nostalgic for what once was so normal? I miss my family and friends, breaking bread with others, although I’m not sure I’d miss the kind of dinner party I write about here. Stay safe, everyone. 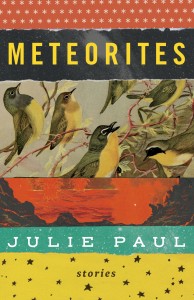 The Dawsons’ doorbell played Jingle Bells although Christmas was still weeks away. After a shy hello at the beige-sided split-level’s front door, young Chloe took June by the hand and led her away, proclaiming, “The kingdom awaits!”

Cassie had never met Iain before. She fumbled the kiss-on-the-cheek greeting he gave her so that their lips touched. Alicia, luckily, offered only a hug.

“Leave your shoes on,” she told them. “The floors are freezing.”

Pete disobeyed her; he’d gone to a lot of trouble to find matching socks that didn’t have holes, but Cassie left her heels on as instructed. Heels could take a good five pounds off a silhouette.

Alicia’s feet were encased in matted-looking wool slippers, but Iain wore soft leather boots with skinny laces. Cassie’s imagination leapt to life: she pictured Alicia untying them with her green-tipped fingers, or maybe even her little white teeth. Everything about Iain screamed urban life, from his purple dress shirt and non-denim jeans to his sculpted hair and the way he spoke with a lifted chin. When Cassie tried to picture herself undoing Pete’s work boots by mouth, she nearly laughed out loud.

These people wouldn’t know it to look at him, but scruffy-headed and thick-shouldered Pete was quite intelligent. She had to stop herself from saying so, like a dog owner who calls out, Don’t worry, he’s friendly! even when the dog’s got his muddy paws on a person’s chest. But was furniture-builder Pete all that friendly? He may have come from the prettiest town, but his mouth could spit out some rather un-pretty things. Cassie hoped he would mind his hockey-player tongue tonight.

Iain accepted Cassie’s bottle of Zinfandel and poured her a glass while she looked at the huge photo on the wall, the family smiling and sporting bright sarongs and messy hair.

“Bali,” Alicia said, when she saw her studying it. “Ever been?”

Cassie shook her head. “If it’s not in Florida, we haven’t been there.”

Alicia smiled and nodded. “Florida’s nice. Why don’t we graze a bit?”

Cassie and Pete sat on the bar stools by the kitchen island and began to sample the appetizers. The crackers under the cheese had the consistency of dried soap scum, and the cheese spread was light and creamy, but it fizzed a bit when it met her tongue, and what was that burning aftertaste, sharp as a fingernail on the roof of her mouth? Chili flakes? Pepper?

“It’s a sort of crushed insect from South America,” Iain explained. Cassie’s face was burning. “We brought back a fine selection from our journey last winter,” he continued. “I hope it’s not too spicy.”

“How interesting,” Cassie said. Her mouth had begun to water the way it did during the flu.

The other appetizer was some sort of orange fruit with its leafy wings still attached, a bunch of them gathered around a dish that held a tarry dip. “Have a bit of marmite,” Iain urged them both. “Something from my parents’ homeland.”

“Put some shrimp on the barbie, mate,” Pete said, after which Iain smiled coldly. It was the only Australian thing Pete knew to say.