At Home with John Schreiner

I am one of those who has worked at home, if only weekends and evenings, all my writing life. All the resources I need are in my office: files, reference books, a computer, a comfortable chair, and a stereo system on which I stream Radio Swiss Classic while I work.

My 22 books have all been written at home. With the completion of The Okanagan Wine Tour Guide—my final wine book—I have turned my attention to writing a memoir. I started working on it about five years ago and set it aside twice to do another wine book. I have taken advantage of the self-isolation in our home to get back to work on the manuscript, which was 65,000 words by the end of March. 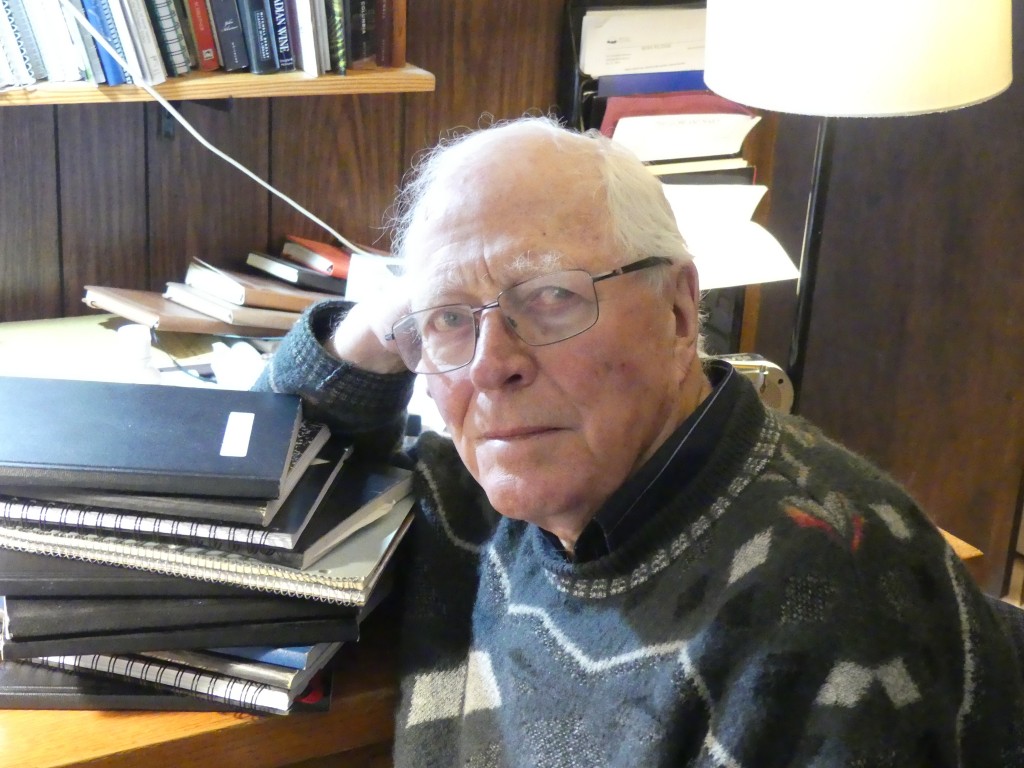 The manuscript is not meant for publication but rather for my family. The writing is good enough for publication and I have had an interesting life—but I doubt it would be of much interest to people not in my circle of acquaintances. No one will mount a Broadway play on the life of John Schreiner.

To give you a flavour of the memoir, here is an excerpt describing the unremarkable start of my career in journalism.

On June 10, 1957, John Diefenbaker led the Progressive Conservatives to a federal election victory for the first time in a generation, winning enough seats to form a minority government. The result surprised many, including the editors at The Regina Leader-Post, where I began my journalism career that year with a summer job. Considering the inauspicious way I handled my assignment that election night, it is remarkable that I spent the next 44 years in journalism.

I had applied for a summer job at the newspaper sometime around the beginning of the year. Bill Thomson, the managing editor, replied, asking for my clippings. I had no clippings. I had never thought to keep a scrapbook when I was writing my high school column; not did I clip the few articles I did for The Sheaf, the University of Saskatchewan student newspaper. So I did not reply to his letter. Looking elsewhere for a summer job, I signed up to plant trees in British Columbia. It was a favourite student job at the time and paid well. Of course, growing up on the Prairies, I had no concept of tree planting in the mountains and likely would not have lasted very long on that job. However, a few weeks before I was due to go to British Columbia, I received a second letter from Thomson, asking why I had never sent clippings. Since I was already home from school and relaxing in Indian Head, I went into Regina for an interview and, even without clippings, I was hired. Either he saw latent talent or he just needed some sober bodies in the news room of a paper that experienced a fair amount of turnover of alcoholic journalists. I abandoned the tree planting job because the newspaper offered what I wanted—the chance to learn the craft of writing. Journalism was never an end in itself.

Like all green reporters at the Leader-Post, I started with the training wheels assignment of writing obituaries. Every morning, I would get the galleys of the paid obituaries we were running in our classified section and then call in at the two Regina funeral homes to see if there was any more detail on the individuals. Finally, I telephoned relatives of the more interesting deceased. I don’t recall much guidance from the editors in writing these, so I just stumbled along for a few weeks. One day, however, I submitted one with a lede that the deceased had come to the West in a Red River wagon. The city editor congratulated me and give me my first by-line. Now the light came on: that was how to start a story. Perhaps I should have figured it out by reading the more experienced writers but I have always learned best by doing. I don’t read instructions well. From obituaries, I graduated to covering Rotary and Lions Club luncheons which were held on alternate weeks in the Hotel Vancouver. The attraction was the free lunch until I came to detest the food. I also got the hotel beat which involved calling at each front desk of the three main hotels in search of interesting guests. Once, I found a Texan who had flown his Piper Cub to Regina to take part in the Ducks Unlimited census of ducks on which each fall’s bag limits were based. Early one morning, he gave me my first ride in an aircraft. I deposited my breakfast in an airsick bag but I got a feature story and a by-line.

The Leader-Post was a thoroughly Liberal newspaper. It was owned by the Sifton family, one of whose ancestors, Sir Clifford Sifton, had been a noted Liberal cabinet minister and a promoter of western settlement. The editor was D.B. Rogers, whose brother, Norman, had been Mackenzie King’s defence minister in 1939 (and was killed in a 1940 plane crash). It never occurred to my employers that the Liberals would not win the 1957 election and, on election night, they deployed newsroom resources accordingly. The best reporter covered the Liberal candidates. Other reporters, in declining order of experience, were assigned to cover the CCF, the Social Credit and, finally, the Progressive Conservatives. I was sent off to the Conservative committee room. Having voted Liberal myself earlier that day (my first vote), I watched the results with the same amazement as everyone else. John Diefenbaker, having flown into Regina earlier that evening, swept through the jubilant committee room about 10 pm. I can’t recall where he went to but I joined a group at a party at the home of Sandy MacPherson, a lawyer who was the city’s leading Conservative. When I got back to the newsroom about two in the morning, I was sufficiently inebriated that Bill Thomson sent me home. Fortunately, a more seasoned reporter had been travelling with Diefenbaker and did file a story. This had been a much bigger story than counting ducks from the air and I had not recognized it.