At Home with Dave Doroghy

Hi, I’m Dave Doroghy, and I’ve determined that if the virus doesn’t get me, my recently adopted news-consumption habits will. Over the past two weeks I have overdosed on negative news. I never expected the macabre plots from Stephen King novels to morph into our reality. A typical day finds me clutching my phone so hard while reading the New York Times online edition that I accidentally bent the phone’s chrome case and almost short-circuited it from the sweat on my palm. While scrolling through the most recent COVID-19 articles on my handheld gadget, I simultaneously listen to CBC Radio in the background, while having over-sensationalized breaking news bombard me on CNN television in the foreground. It’s way too much. The events unfolding are horrific and real and I don’t mean to minimize them, but humour often helps smooth the tragic bumps in life, while momentarily offering a welcome and well-deserved escape.

About the only bit of good news that my recent Fifth Estate focus garnered was the weather forecast for British Columbia. Sunshine coincided with the edict from our province’s latest media sensation, public health officer Dr. Bonnie Henry, to get outdoors for a while. I’ve been filling her prescription with jogging. It’s the only routine I’ve had lately, or consistent healthy thing I have done since March 11th, 2020.

Whether it is jogging solo while listening to 70s music on my crumpled and sweaty phone, running 5K with my partner Jeannie and her niece Megan, or pounding the pavement with my long-time running pal Keith, I have been trying to get a run in each day during the downtime this crisis has created. It is just what the Doctor ordered, and I want her to know that I have not once contravened the six-foot social-distancing order in the process. You may wonder how such a convivial guy like me can go out for a run and not mingle or be overwhelmed by dangerous interaction with the friendly masses also out following the Doctor’s advice. Well, for a clue on how I keep my distance from others, just take a look at the colourful picture that accompanies this essay. 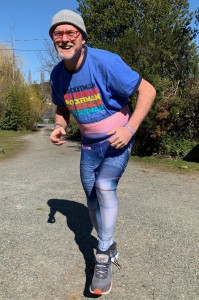 Keeping strangers at bay during these anxiety-ridden times is easy. Before I go for a run I roll on my tightest, loudest Lycra running tights. I call it my Spandex barrier. Then I slip on a pair of old stinky sneakers. A ratty cotton mismatched T-shirt advertising an outdated movie goes on my torso and to finish the ensemble I don an ugly grey wool toque that’s been partially eaten by moths. Oh, and the bright red prescription glasses you see me wearing in the picture are a permanent fixture on my face 365 days a year. I give new meaning to the words “mismatched” and “misfit.”

Wearing this type of clothing while out jogging actually makes people run for the hills faster than you can say “viral infection.” Looking like I do, innocent pedestrians avoid me, usually giving me a berth far wider than the prescribed six feet. Did I mention that I have not washed this outfit in three weeks? Sometimes people actually cross the street to the other side when they see me coming. “Who wants to be anywhere near that weirdo?” they think to themselves. To that I say, the clothes are comfortable and help me maintain a safe distance. Besides, Rocketman was one hell of a good movie.

The two R’s that help me reduce my stress are running and writing. I plan to do a lot of both of them over the next while. I’ll close with an insider’s confession that will make my editors at TouchWood glad that we edited my entire book online: I wear the exact same outfit when I write.

I hope that my forthcoming book, Show Me the Honey: Adventures of an Accidental Apiarist, will give you something to laugh at and to escape with, if only momentarily, from the serious situation we all face in the days ahead. In the following excerpt, I address how the bees and I both prepare for the long cold winter on my houseboat on the Fraser River. Like my bees, I prepared by stocking up on water and food, not unlike what some people are doing today. Stay healthy, stay safe, and wash your hands.

Excerpted: Show Me the hOney

When I had completed these relatively simple hive-winterizing tasks, I noticed that as the days grew shorter and we approached the dead of winter, both the bees and I went out less, and this was particularly true during the worst cold snaps.

Please don’t get me wrong in this next paragraph. It’s not like I turned into a bee that bone-chilling season. This is no Franz Kafka Metamorphosis tale, yet I couldn’t help but observe that my winter habits mimicked the behaviour of my bees. I stored up food as the roads in Vancouver became snow covered and treacherous. When the first cold snap hit and the weather forecast called for two days of heavy snowfall, I buzzed over to Costco in my VW van and foraged through the colourful aisles. I packed my cart and the van like six-sided bee cells with supplies: family-sized multi-packs of macaroni and cheese, olive oil, canned tuna, eggs, bananas, jumbo boxes of crackers and cereal, bottled water, almond milk, and some veggie burger patties. After this foraging excursion, I didn’t have to go out at all for food because I had my winter supply stored away in dry, rectangular (as opposed to hexagonal) cupboards.

The next part of my cold-weather diary is a bit embarrassing, as it deals with going to the bathroom. Flight activity around the hive in winter grinds to a halt like a major airport during a blizzard. The only reason the bees venture outside is to poop. The correct terminology for these trips is “cleansing flights.” Bees don’t pee. They store as much water as their small bodies can hold and release a tiny bit of liquid waste in the form of uric acid. Uric acid contains hardly any water. When it comes to doing “number two,” the girls work hard to keep the inside of the hive clean. As such, each worker bee will hold in her feces until she is well away from the hive. So the main reason for the bees to leave the hive in the winter is simply to fly out and use the great outdoors as their bathroom.

I was in the same boat as my bees during the most brutal cold snap. My pipes were frozen, the toilet wouldn’t flush, and I was forced to brave the elements and go outside onto the deck to pee into the river. I know what you are thinking now. Is it bad to pee into a tidal river, and what about his hygiene with no water? I worried too.

According to a cute little video I found online, it is not environmentally egregious to pee in salt water, though the same does not hold true for freshwater sources. Urine contains 95 percent water, the waste by-product urea, sodium, chloride ions, and potassium. Our urea is a bit different in compound and form from the bees’ more solid uric acid. The ocean contains the same compounds found in human urea. Also, nitrogen, another pee by-product, combines with sea water to create ammonium, which ocean plants use for food. To top it off, the amount of urea is but a tiny drop, while the great big sea, to where my river travels, measures liquid volume in zillions of litres. 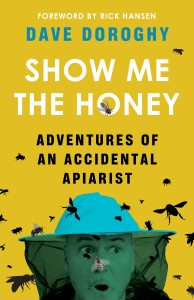