At Home with Alison Acheson

One day of isolation

So I set out to write something catchy and fun for this blog post. I had pics of the ugly, refusing-to-flower rhododendron, and plans to dig it out of my little front patio garden. I did dig it out, mostly because I needed some outdoor time and some exercise.

My memoir recently published with TouchWood is titled Dance Me to the End, and it is the story of the very long short year I spent caregiving my spouse through his rapid form of ALS. The title, based on Leonard Cohen’s song, connects with my love of dance.

I have written a number of books for children and young people of all ages, as well as short fiction for adults. Dance Me is my first memoir.

I am, in truth, a recovering introvert who needs to go out and find a solid dose of musication on a regular basis and at the moment I AM NOT GETTING IT.

On Monday, March 16, the night following Prime Minister Trudeau’s speech, my son’s friend was playing at a local venue in Gastown, not far from where I live in the East Side of Vancouver. The club was going to restrict the number of people they allowed in. I went. And was one of not even two dozen people standing and sitting at appropriate distances about the large floor space. I put four times the usual donation amount in the bucket they keep by the front door for that purpose; I knew it might be the last time I get to see music being performed in front of me for a very long time. I knew it might be the last gig pay that the musicians see. I was married to a musician for decades, and now my son is in music school; I know how this works. I revelled in the music, original tunes by Tim Sars. (Yes, he did joke about his name.)

When I was first widowed, almost four years ago, I had no idea how significant live music would be to my healing. Unlike the introverted act of writing, the art forms that are created right in front of their audience are acts of magic and wonder. They restore my faith in our world and in humanity and in our individual capacities to move forward with this wonderful thing of Life. Loss. Learning. Loving. Laughing.

I’ve stopped counting the emails coming in about cancelled tickets for concerts I was supposed to see—Drive-By Truckers and Wilco in Seattle, and I’ve missed Patti Smith…again! 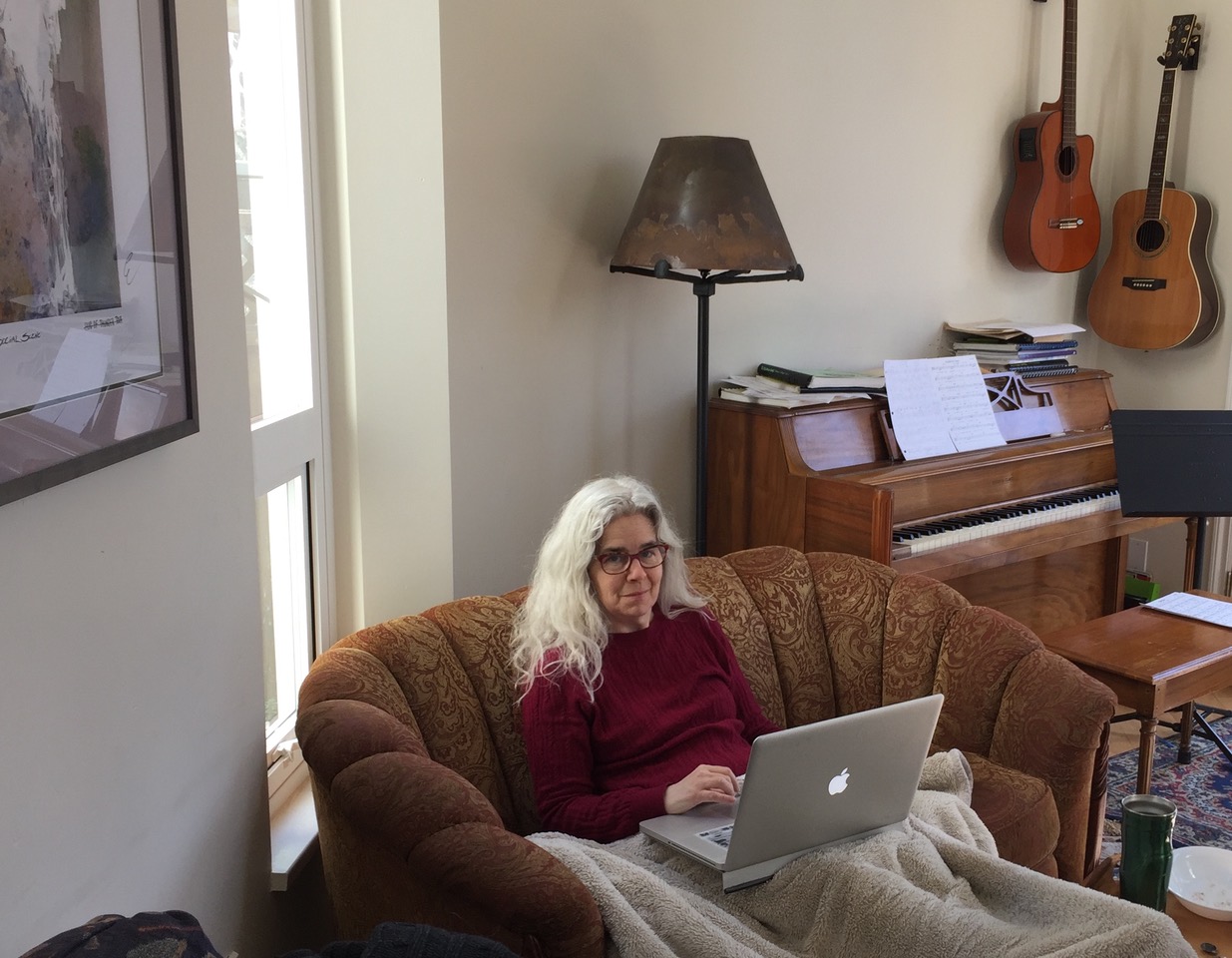 Instead I am writing. (Surprise!) I have set myself double my usual daily word count, and so far, am managing to keep to that, even as I switch my UBC writing instruction from face-to-face to online. And I am reading, working my way through the stack of books. Michael Christie’s Greenwood, the anthology of New York Times Modern Love columns (I’m trying to write one), and a book on the necessity of imagination in having—or trying to have—faith. Then there’s that million-page William Trevor short fiction collection I keep returning to, always amazed how I can take weeks away from it and know exactly the story I’m in within a few sentences…now that is good writing. And, of course, some reading for teaching.

I was so very housebound in the last months of my spouse’s illness. I’d never been so housebound to that point. At that time, I rediscovered my childhood love of losing myself in a book. (Because when you teach writing, you can forget that—it’s true.) So this bout of “housebound” has a freedom to it. I have learned that there is good with bad and vice versa, and to be grateful for what each yields. I am going to say that, for me, reading and writing and digging out unhappy rhodos, and long rambly walks avoiding others…is fine with me. It is time to centre and create and talk with family to keep them from loneliness. We have telephones and email. Imagine a time when you left your country and might receive a letter once a year, written months before.

Today I discovered live-stream house concerts! And watched and listened. All the times I have cursed Facebook, and now I have musicians playing music in front of their wood-burning stove, deep in the bowels of Ontario, playing on my kitchen table while I go about washing dishes and cleaning counters, taking a break from writing and teaching. I pause in my work to just sit and watch and listen. I hear their friend reading the comments that are rolling in, and hear their laughter and happiness with the pleasure they are bringing to people. Because this is what musicians do in ways we cannot understand fully. As writers do, and dancers, and artists. I return to my writing, energized.

My son sings around the house. My in-house Sinatra, as I call him. So the musication will go on.

Somewhere around here, I have a harmonica and a beginner’s instruction book. I think I might have to crack that open next week.

excerpted: Dance Me to the End 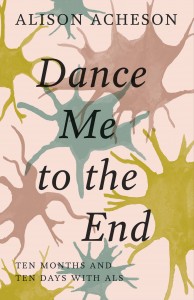 The fascination with body function that is a hallmark of new motherhood, even for those who pride themselves on being beyond or above such, had once again become a part of my life. Not something I planned. With it came the inevitable scrutiny of bathrooms.

Even in the early stages, with the onset of symptoms, I became aware of how our immediate world of home was changing.

There was a window in the ensuite bathroom, and immediately outside this window was a weeping birch. In the summer, the glass was filled with delicious little green leaves. In the fall, the leaves were rattly orange. In the winter, when the branches were bare, I put up a curtain of mulberry organza.

Once the window was in place, spiders became part of the bathroom-scape. It had been Marty’s household task to clean that room, and with the thing he had for spiders, it was his routine to vacuum the poor things—except he always left the one with the busiest web, the most captures. I didn’t want to hear about the vacuuming bit. I’d remind him that as much as he feared spiders, he loathed mosquitoes more, zzzz-ing in the night and sucking his blood.

At the time of renovating that downstairs bathroom, our little en suite began to take on a feel of the forsaken.

I often ask writingstudents to consider the difference between a character knowing something is about to happen versus not knowing. Tension comes, I believe, from knowing. Consider the difference between walking into a house, when you feel certain that someone is lying in wait for you, versus walking in and being surprised when someone leaps out at you. True, the leaping out might be enough to cause you to pee yourself, and the adrenalin will overwhelm. But if you walk into a silent house, in the middle of the night, lights out, and you know someone is there, and you begin to imagine you hear his breathing, and you can hear your own heartbeat, and everything inside you is churning and knotting . . . that is tension.

This little room—smallest in the house—was now left behind, with our move to sleeping downstairs. I still used it as a shower once in a while, but every time I did, I was reminded that at some point I would return to it as my bathroom—and when I did, I would be a different person. Who, I didn’t know.

For now, it wasone of the few places I was alone.

Back in the time of the end of summer, late one morning when I could finally find time to shower, and Marty had gone golfing, I’d discovered a leaf from the weeping birch had wandered in through the open window, and was perched on the back of the toilet. I’d picked it up and tossed it back out.

aDownstairs, in the new bathroom, the toilet had been put in place the third week of September, and at that point, Marty had begun to make only one daily trip upstairs, to bed. Thinking about it at that point—late November—and remembering how he’d wondered at my flurry of activity to renovate. Then he’d suddenly needed the renovation, needed not to haul himself up the stairs. He’d been grateful to have the new downstairs facilities . . . even as I was stunned that we needed them, and that we’d made it happen with family and neighbours pitching in.

There weremany such moments, out-of-mind experiences, where something took me over, and I’d have to begin some process, or make a decision, or just do something. Then look back, and wonder: How did that happen?

Even in late September, the upstairs en suite window was still open. Again I found a birch leaf, not green, but gold and curled with dryness, on the back of the toilet. I went to toss it out the window, but instead held it in my hand. There was an insistence to this leaf. It was another piece, reminding me it was fall, and that the seasons were changing. This would be a last season. Another last season. I left the leaf on the back of the toilet, gold on white. In just that moment— to be repeated—I was ready for fall. Whatever that meant.

Now, late in November, the en suite was mine alone. It became—along with the car—my place to cry. No one could hear me. I could feel hot water sluicing over me, and that felt good because my body was beginning to ache at that point.

It was now also my job to clean that room, but I never seemed to have time for that. A quick swipe at the sink, swoop of a toilet brush. Dust and spiderwebs grew. I didn’t vacuum spiders, so long as they stayed safely in their corners. Those ubiquitous leaves were in the corners, too, now. Even with window closed, and I didn’t want to clean them out. I left the leaves. They reminded me that there was an outside world. If I couldn’t go out to it, it would come in to me, and let me know, remind me, it would be ready for me to return. It would be waiting. Loving.

There was one extraordinarily tired morning, when I stood in the shower, with winter light through the window. I leaned against the wall, closed my eyes. All I wanted was the hot hot water, and the nothingness of it. I looked up to see the shadow of one long, thin-legged beauty who’d emerged from a corner, and was climbing delicately over the shampoo holder, drops of water falling, making her flinch, and still she travelled.