All the Quiet Places Nominated for the Scotiabank Giller Prize 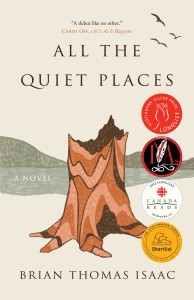 TouchWood Editions is excited to announce that author Brian Thomas Isaac’s debut novel, All the Quiet Places, has been nominated for the Scotiabank Giller Prize, Canada’s richest literary award for fiction. Yesterday morning the Prize announced the 14 nominated books, including 7 first-time nominees and no previous winners, in an online broadcast by previous winner, Omar El Akkad.

Brian has been overwhelmed by the support for his novel over the past year, but this nomination for Canada’s top fiction prize was extremely meaningful. As he says, “If someone had told me when I walked out of school with only a grade 8 education that at the age of 72, I would be longlisted for the best fiction book in Canada I would not have believed it.” After leaving school, Brian had a short career riding bulls in local rodeos until common sense steered him away. He went on to work in the Northern Alberta oil fields and eventually retired as a bricklayer. Looking back to his 12-year-old self with a chuckle Brian adds, “being nominated for such a prestigious book award would have seemed laughable. . . or to live that long! To Elana Rabinovitch and the 2022 Giller Prize jury, I thank you from the bottom of my heart.”

All the Quiet Places won the Indigenous Voices Award for Published Fiction, was a finalist for the Amazon Canada First Novel Award, was longlisted for the CBC’s Canada Reads competition earlier this year, was named a Book of the Year 2021 by Chapters-Indigo and achieved National Bestseller status. You can see Brian Thomas Isaac in person at the Vancouver Writers Fest, which will be held October 17 to 23.